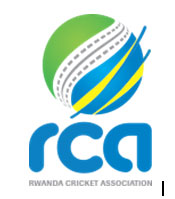 Rwanda Cricket Association joined the ICC as an Affiliate Member in 2003 and has since regularly competed in international competition.

It finished sixth out of eight in the inaugural Pepsi ICC Africa World Cricket League Division 3, in 2006, before making progress to fourth in 2008. Its youngsters have participated in the East Africa Regional U17 tournament and the U19s took part in the ICC Africa U19 Cricket World Cup Qualifier Division 2 event in Swaziland in July 2010.

Rwanda Cricket Stadium or Kicukiro Oval is the main cricket ground in Kigali. In August 2011, Rwanda Cricket Stadium Foundation was formed to build and manage, on a not-for-profit basis, the first dedicated international cricket ground in Rwanda. It is located on a 4.5-hectare site on the edge of Kigali, Rwanda's capital. The construction of Rwanda's first dedicated cricket ground will provide a permanent home for the sport, helping its development and increasing opportunity for thousands of disadvantaged young people.