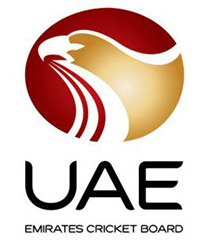 Cricket in the United Arab Emirates (UAE) is governed by the Emirates Cricket Board, overseeing all cricket activities in the Emirates including the 4 major councils; Abu Dhabi, Ajman, Dubai and Sharjah.

In 1990 Emirates Cricket became an associate member of the International Cricket Council (ICC).

An emerging One Day International (ODI) country, UAE Senior Men’s team won the ACC Trophy on four consecutive occasions between 2000 and 2006, they were runners-up in the other three times the tournament was played; 1996, 1998 and 2008.

UAE Men’s won the ICC Trophy in 1994, playing their first ODIs that year, they qualified for the 1996 and 2014 Cricket World Cups. Other ODI matches were played in the 2004 and 2008 Asia Cup tournaments. In 2014 the UAE gained ODI status through to 2018. UAE’s U19’s played their first ICC World Cup in 2014, when the UAE hosted the international tournament. UAE’s U19’s recently competed in 2015’s ACC Premier Tournament. UAE’s women's team competed in the 2007 ACC Women's Tournament and has subsequently continued to promote women's participation in the game. The Women’s team are currently champions of the recently introduced GCC T20 Women’s Championship.

Over a million Emirati’s live in UAE, and the Emirati Development Programme forms an important part of Emirates Cricket’s strategic plan in growing the game.

The UAE National squad currently comprises of 3 Emirati Nationals and it’s the aim of the Emirati Development Programme to ensure that there will be a steady integration of National players available for selection, in all forms of the game, in the future.

Cricket, traditionally amongst the Emirati population, has a very low participation rate, with a majority never having experienced the game. The ECB now has the resources to take professional coaching into local schools and provide playing opportunities that have been limited before. A resource book of cricket in Arabic has been created and playing equipment provided to encourage and support this learning and development.

In addition, the Programme has been bolstered by the employment of a dedicated Arabic speaking Development Officer who will be able to take the game forward.