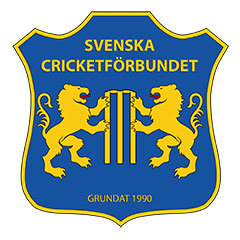 The first Cricket club in Sweden was formed in Gothenburg in 1883; one of the founders, Erik Blidbert, had learnt the game in London, and became a natural leader for Sweden’s pioneering Cricket enthusiasts. The club’s full name was Lyckans Samfund: the ‘Society of Joy’, a pun on the name of the local neighbourhood.

The first organised club of modern times called the Stockholm Cricket club, was created in 1948 by staff the British Embassy in Stockholm. They played against the crews of passing ships and made annual visits to Helsinki. Västerås started in the 1960s and teams from Gothenburg and Mariestad (founded by Ugandan-Indians) followed in the 1970s.

The Swedish Cricket Federation (SCF) was formed in 1990. The driving force behind it was Guttsta Wicked Cricket Club. The Swedish Cricket Federation became a Member of the ICC in 1991. Over the years, clubs like Stockholms Akademiska Cricketsällskap set-up by students at Stockholm university in 1996, which is now one of the largest club in the country, fuelled the growth of Cricket in Sweden. Initial years, the progress was slow but the interest was there. Foreign teams also toured Sweden from time to time to keep things interesting. MCC visited Sweden in June 1999 which was one of the high points for the Cricket in the country.

After becoming an affiliate member of ICC, Sweden participated in many ICC organised tournaments. In 1997 Sweden successfully hosted its first ever ICC Europe (then ECF) tournament, an indoor tournament in Halmstad.

The national club scene inspired by the achievements of the national team started taking Cricket seriously and in 2012 the SCF increased its membership to 21 clubs. The newly formed Division 2 was setup the same year. In 2013, six new clubs joined the league with total numbers of players in the country now standing at around 1500. With the ICC development fund, youth Cricket also got a lot of attention with youth camps organised in the 3 larger Cricketing regions - Stockholm, Malmö and Göteborg. All of this meant further strengthening of the club scene adding to the membership of SCF. In 2014 the SCF applied to become members of the Swedish sports confederation (Riksidrottsförbundet, RF). The RF accepted the application and recognized SCF as its 71st member organisation in May 2015.

2016 was the first year the government funding was available to SCF. This helped build many new Cricket facilities in the country that also made it possible to host ICC Europe WCL Divison 2 tournament in Stockholm. Sweden finished runners-up in that tournament and once again gained promotion to European division 1. In 2015/16 Sweden was one of the largest receiver of refugees in Europe, many of these refugees came from Cricket playing countries. This helped form many new clubs and helped existing clubs gain new members because of government’s integration initiatives. Cricket is now growing at a rapid pace in Sweden and clubs exist in almost every part of the country.