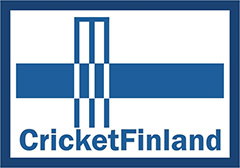 Cricket in Finland has a longer history than you would imagine! The first game on record was played at the Helsinki Olympic stadium in 1953. Whilst some cricket activity was believed to have taken place during the 1960s, it was not until 1972 that the first official cricket club was formed under the name of Helsinki Cricket Club.

Development on a wider scale, however, was slow and it wasn’t until the 1990s that some more cricket clubs were founded. As a direct result of this increased activity, the Finnish Cricket Association (FCA) was formed in 1999, with four member clubs. By the end of 2015 there are 30 registered cricket clubs covering all the major cities in Finland as well as more remote places, the most northern clubs being Oulu CC and The Northern Lights CC in the city of Oulu. The biggest milestone in Finnish cricket history saw the grand opening of the Kerava National Cricket Ground in 2014, the first fully dedicated cricket ground in the country, in the presence of Mike Brearley, Lord Mervyn King,  MCC and Finnish government officials. Having an international standard facility is critical for the long-term future of the game in Finland.

The Finnish national cricket side has consistently participated in ICC Europe regional events since 2001 and hosted the ICC Europe Indoor Championships in 2008.

In terms of domestic development in 2016, Cricket Finland (CF) organises a three divisional 40-over league, a 15-team T20 championship and a winter Indoor League.

The Junior Development Programme is top priority for Cricket Finland, highlighted by the hiring of its first full time coach in 2015. This project has seen rapid growth among schools with fun cricket being delivered on a regular basis. Junior training and camps are run in addition to the schools programme, to help groom the players of the future. Currently CF is looking to widen its horizons with interested parties to help deliver cricket to more cities across the country. To strengthen the foundations of a thriving and sustainable cricket programme, CF regularly organises domestic coaching and umpiring courses.