We take a trip down memory lane to relive some of the finest memories of the previous events, which have produced well-deserved champions and have seen some outstanding individual performances.

The ICC World Twenty20 India 2016 will be the sixth edition of the event that was first staged in South Africa in 2007.

The tournament is a biennial event, though it was held two years in a row in 2009 and 2010 in England and the Caribbean respectively. The tournament brings the most explosive batting talent in the world together on one platform, while the expanded field of 16 teams allows the Associate and Affiliate Members to pit their wares against the Test-playing nations on a more regular basis.

We take a trip down memory lane to relive some of the finest memories of the previous events, which have produced well-deserved champions and have seen some outstanding individual performances.

The inaugural event was staged in Cape Town, Durban and Johannesburg from 11 to 24 September, and featured the ten Test-playing nations as well as the finalists of the 2007 WCL Division One tournament, Kenya and Scotland.

The 12 teams were divided into four groups of three each, with the top two from each group advancing to the Super 8s. The group stage saw the first bowl-out in World T20 history with India getting the better of Pakistan after their match ended in a tie. Zimbabwe stunned defending ICC World Cup champion Australia in its first league encounter but still failed to make the Super 8s for which South Africa and Bangladesh from Group A, Australia and England from Group B, Sri Lanka and New Zealand from Group C and India and Pakistan from Group D qualified.

Yuvraj Singh set the Super 8s alight as he smashed six sixes in one Stuart Broad over during India’s comprehensive victory over Englad. India topped Group E of the Super 8s with New Zealand, the only team to beat it in the competition, also winning through the semi-finals. Pakistan and Australia came through from Group F.

India powered past Australia and Pakistan defeated New Zealand to set up a dream rematch in the title round. In front of 32,217 noisy fans at the Wanderers, first-time skipper Mahendra Singh Dhoni chose to bat and India rode on 75 from opener Gautam Gambhir to score 157 for 5 from its 20 overs. Umar Gul triggered a mid-innings slump with 3 for 28 before Rohit Sharma applied the finishing touches with an unbeaten 30 off 16 deliveries. 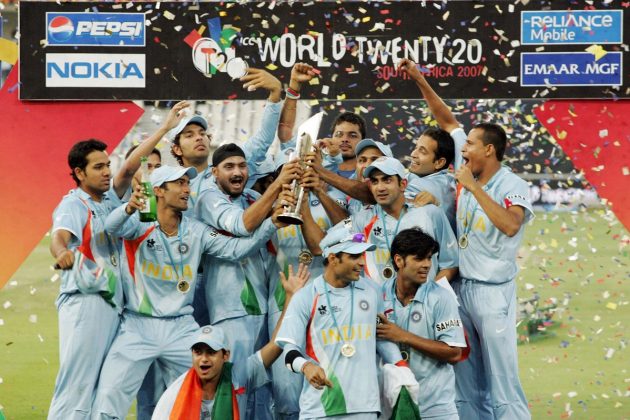 Pakistan was rocked early by RP Singh and Irfan Pathan then took 3 for 16 in the middle overs, but Misbah-ul-Haq kept his team in the hunt with three towering sixes so that going into the last over, Pakistan needed 13 to win with the last pair at the crease. Misbah smashed Joginder Sharma for six to bring it down to 6 from 4 balls, but a paddle scoop ended in a skier to short fine-leg as Pakistan was bowled out for 152, leaving India the winner by five runs. Pathan was the player of the final and Shahid Afridi of Pakistan was declared Player of the Series.

Having won the ICC World Cup 1983 and been joint winners of the ICC Champions Trophy 2002, India thus became the first nation to win all the ICC trophies on offer.

Australia’s Matthew Hayden finished as the highest run-scorer in the tournament with 265 runs from six matches, while Pakistani paceman Gul was the leading wicket-taker with 13 wickets from seven matches including 5 for 6 against New Zealand, the only five-for in the competition.

Packed crowds greeted the 12 participating nations – nine Test-playing sides and three Associate Members in Netherlands, Ireland and Scotland – at Lord's, The Oval and Trent Bridge over two weeks of the second edition of the tournament.

Sri Lanka, driven by Tillakaratne Dilshan and Kumar Sangakkara with the bat, and Lasith Malinga and Ajantha Mendis with the ball, had an unbeaten run to the final. But Pakistan, who began the tournament poorly and just scraped past the group stage, rode on an all-round Shahid Afridi to lift the title. 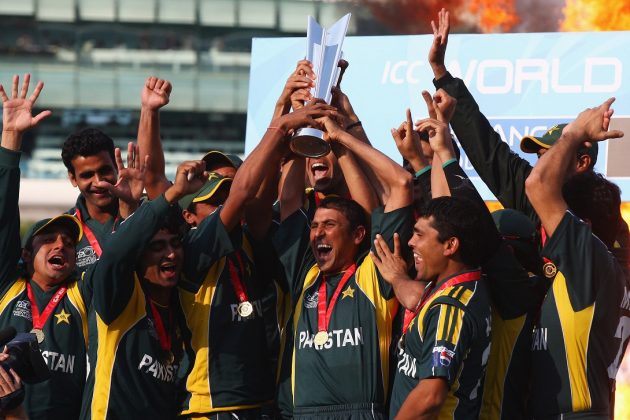 First, Afridi's 34-ball 51 and economical spell of 2 for 16 helped it dump a favoured South Africa out in the semi-final, before a mature half-century from the all-rounder completed the 139-run chase in the 19th over of the final.

West Indies, led by a rampaging Chris Gayle, was the other semi-finalist, and was responsible for ending Australia's campaign in the very first round. Ireland qualified for the Super 8s at the expense of Bangladesh, while the Netherlands left with a memorable win over England.

Dilshan, who introduced the scoop during this edition, was the leading run-scorer with 317 runs at 52.83 and was named player of the series. Pakistan's Umar Gul topped the wicket-takers chart with 13 scalps and an economy rate of 6.44. 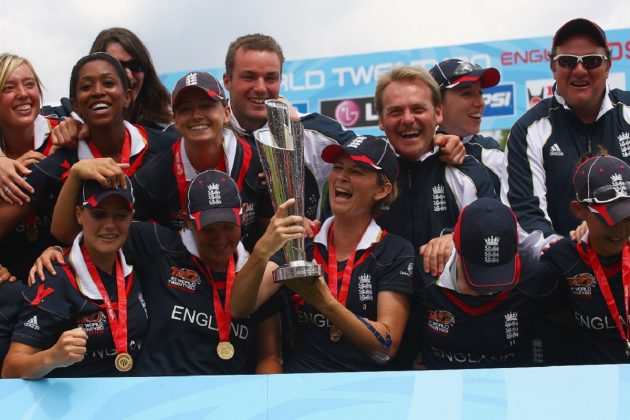 For the first time, the ICC Women's World Twenty20 was also held alongside the men's tournament, with the semi-finals and final played as double-headers. Katherine Brunt's opening spell of 3 for 6 kept New Zealand Women to 85, a target that was easily chased by England and Claire Taylor, who finished with 199 runs and the Player of the Tournament award.

The third edition of the tournament was held just ten months after the previous one to adjust the international calendar. The format was the same as the first edition, with the ten Test nations, Afghanistan and Ireland participating.

Paul Collingwood lifted the trophy for England – it was the side's first global ICC title – after a 111-run second-wicket stand by Craig Kieswetter and Kevin Pietersen helped it chase Australia's 147 for 6 with seven wickets to spare.

Pakistan, the defending champion, was thwarted by Mike Hussey's 24-ball 60 in the semi-final. Mahela Jayawardene's fine hundred was the highlight for Sri Lanka, the other semi-finalist. India and South Africa, however, had tournaments to forget. 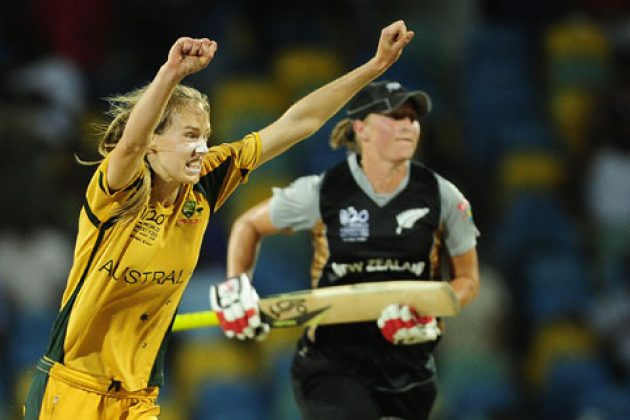 Jayawardene topped the batting charts with 302 runs from six games, while Pietersen, with 248 runs, walked away with the tournament award. Australia's Dirk Nannes was the highest wicket-taker, with 14 from seven games.

The women's competition, which ran concurrently, had New Zealand on the receiving end again, with Australia fighting back for a three-run win in a low-scoring affair and a thrilling finish. New Zealand's Nicola Browne, joint-top wicket-taker with India's Diana David with nine wickets and 79 runs from five games was Player of the Tournament.

The fourth edition of the tournament was the first to be held in Asia, with matches in Colombo, Hambantota and Pallekele from 18 September to 7 October. It was held in the same 12-team format as 2010, and the ten Test-playing nations joined by Afghanistan and Ireland, who came through from the ICC World Twenty20 Qualifier 2012 held in the United Arab Emirates in March.

There were few surprises in the group stages, and following the Super 8s, Sri Lanka, West Indies, Australia and Pakistan made it through to the semi-finals. Sri Lanka overcame Pakistan by 16 runs and West Indies swatted Australia aside by 74 runs to set up the grand final at the R Premadasa Stadium in Colombo.

With Ajantha Mendis (4-12) striking telling blows, the West Indies innings gathered no momentum until Marlon Samuels cut loose with a flurry of sixes. Darren Sammy, the captain, then lashed an unbeaten 26 off just 15 deliveries as West Indies finished on 137 for 6 on a low, slow surface that assisted the spinners.

Ravi Rampaul dismissed Tillakaratne Dilshan in the first over of the chase and while Mahela Jayawardene and Kumar Sangakkara steadied the ship with 42 for the second wicket, they took 50 deliveries in doing so. Samuel Badree dismissed Sangakkara before Sunil Narine took over. The off-spinner had remarkable figures of 3.4-0-9-3 as Sri Lanka was bowled out for 101 and slumped to its fourth loss in the final of an ICC event in five years. It was West Indies’ first ICC title since the ICC Champions Trophy triumph in England in 2004. Samuels was named Player of the Final while Australian Shane Watson was adjudged Player of the Series. 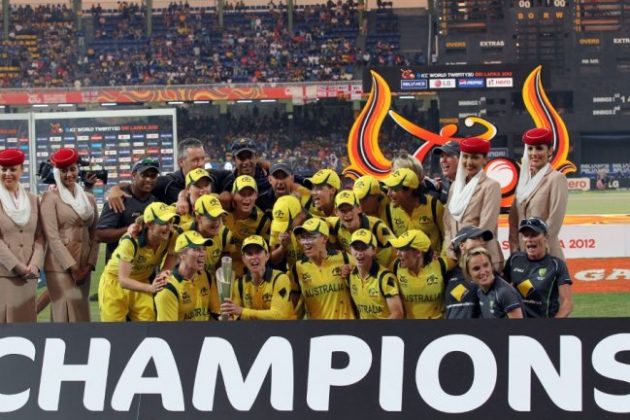 Australia Women clinched a second successive title, holding its nerve in a tense finish to edge out England Women by four runs. Jess Cameron top-scored with 45 in Australia’s 142 for 4. England kept losing wickets and suffered on account of loss of partnerships, Jess Jonassen’s 3 for 25 keeping it down to 138 for 9. Cameron took home the player of the final title and Charlotte Edwards of England was adjudged Player of the Series.

The tournament returned to Asia for a second consecutive time, the fifth edition being held across eight venues in Bangladesh from 16 March to 6 April. For the first time, the tournament featured 16 teams. The top eight teams in the ICC T20I Team Rankings secured direct entry into the Super 10s, where they were joined by Bangladesh and Netherlands, who topped their respective four-team groups.

The Netherlands provided the upset of the Super 10s by crushing England by 45 runs in Group 1, though both teams had already been eliminated by then. Sri Lanka and South Africa made the semi-finals from their group, and were joined in the last four by the Group 2 topper India and West Indies, the defending champion. Sri Lanka muscled past West Indies by 27 runs to exact revenge for defeat in the final of the previous edition while India ensured that South Africa’s winless record in the knockout stage of ICC events remained intact by surging to a six-wicket win in the second semi-final.

With Virat Kohli in sublime touch, India looked on course for a competitive total but lost its way in the last quarter to settle for 130 for 4. Kohli remained unbeaten on 77 off 58 deliveries. Sri Lanka was hardly troubled as it raced to 134 for 4 in the 18th over, Kumar Sangakkara leading its chase with an unbeaten 52. It was the perfect send-off for former captains Sangakkara and Mahela Jayawardene, both of whom retired from Twenty20 International cricket at the end of the tournament. Sangakkara was the player of the final while Kohli, with 319 runs from six innings at a stunning average of 106.33, was named the player of the series. 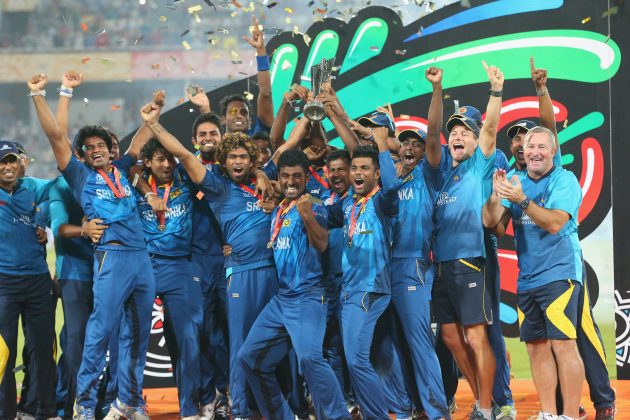 Imran Tahir, the South African leg-spinner, and Ahsan Malik, the right-arm medium-fast bowler from Netherlands, were the joint highest wicket-takers with 12 wickets apiece.

Australia Women made it a hat-trick of titles by overwhelming England Women by six wickets with nearly five overs to spare. Sarah Coyte did the bulk of the damage by taking 3 for 16 as England, put in to bat, was kept down to 105 for 8. With Meg Lanning spearheading the chase with a 30-ball 40, Australia surged to 106 for 4, Ellyse Perry applying the finishing touches with an unbeaten 31. Coyte was named the player of the final while England’s Anya Shrubsole walked away with the Player of the Series honours.
Share