Misbah: “It is ironic for both the players as well as the fans that the journey to the number-one position has been outside Pakistan”

“Being part of a team that is ranked No.1 in Test cricket is a pinnacle achievement for any cricketer,” says Mr Richardson

Misbah-ul-Haq today received the prestigious ICC Test Championship mace for inspiring Pakistan to the top of the MRF Tyres ICC Test Team Rankings for the first time since the current rankings system was introduced in 2003.

ICC Chief Executive David Richardson presented the mace to Misbah at the home of Pakistan cricket at the Gaddafi Stadium in Lahore and Pakistan captain Misbah said it was befitting that the mace presentation was taking place there.

“There can’t be a better location to receive the ICC Test Championship mace than this ground where we last played a home Test seven years ago,” said Misbah. “It is ironic for both the players as well as the fans that the journey to the number-one position has been outside Pakistan.

“The players have missed on the crowd support, while the spectators have been unable to watch live some magnificent team and individual performances. But I am confident that things will change and international cricket will soon return to Pakistan.”

Misbah added he was delighted to hold the mace in the twilight of his career.

“It has always been a dream to lift an ICC trophy as captain. To be only the ninth international captain to achieve this honour in the traditional format of the game is something to be very proud of. This mace is a reward for the efforts and hard work of each and every individual who has been part of this group over the past few years.”

Pakistan is only the fifth side after Australia, England, India and South Africa to top the ICC Test rankings, while Misbah is the ninth captain to lift the mace after Steve Waugh, Ricky Ponting, Michael Clarke, Steve Smith (all Australia), MS Dhoni (India), Andrew Strauss (England), Graeme Smith and Hashim Amla (both South Africa).

Mr Richardson congratulated the Pakistan cricket team, saying: “The ICC Test Championship mace is a symbol of excellence and a recognition of a side’s outstanding performance in the purest format of the game. Being part of a team that is ranked No.1 in Test cricket is a pinnacle achievement for any cricketer. Pakistan is a deserving recipient of the mace.

“It is all the more impressive that it has reached the number-one Test ranking despite not being able to play a series in front of its home crowd since March 2009.

“On behalf of the ICC, I want to congratulate the Pakistan cricket team and Misbah-ul-Haq in particular for the way he has led his side. I hope that the team continues to go from strength to strength. A strong Pakistan side is good for international cricket.”

Mr Richardson said the upcoming weeks will continue to be as exciting and entertaining for Test cricket fans.

“The top four ranked sides are separated by just three points and they will be playing in the coming weeks. The contest for the number-one position gives great context to the upcoming series, providing fascinating entertainment for followers of the Test cricket,” he said.

Number-two ranked India will host New Zealand in a three-Test series from Thursday and if it wins the series, it will move to the top of the table even before Pakistan starts its three-Test series against the West Indies on 13 October. The two-Test series between Bangladesh and fourth-ranked England begins in Chittagong on 20 October, while South Africa will travel to third-ranked Australia where the first Test will commence in Perth on 3 November. 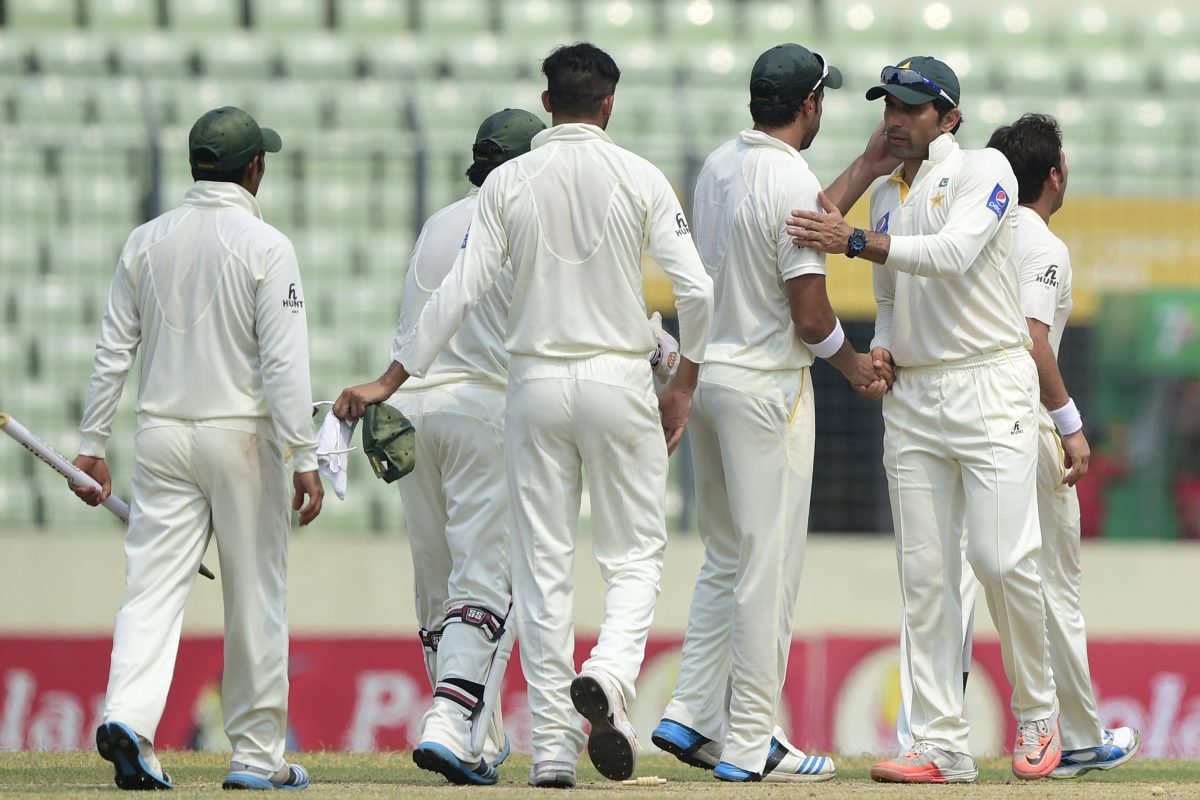 These fixtures are part of an exciting race to the annual cut-off date as the side that tops the ICC Test Team Rankings on 1 April will also receive a cash award of $1million, while the second placed side will collect $500,000. The third and fourth placed sides will receive $200,000 and $100,000, respectively.

Misbah admitted his side will have to produce strong performances to finish as the number-one ranked Test side at the 1 April cut-off date.

“The next target we have set for ourselves is to finish as the number-one ranked Test side at the 1 April cut-off date. It is not going to be easy as we have series against formidable sides like the West Indies, New Zealand and Australia. But instead of getting overawed by our opponents, we need to trust in our abilities, focus on our strengths and try to be as consistent as possible,” Misbah concluded.

Pakistan’s Test series against the West Indies will begin in Dubai on 13 October, while Christchurch will be the venue of the first of the two-match series on 17 November. The three-Test series in Australia will start with the day/night Test in Brisbane on 15 December.

The mace was produced by the then British Crown Jeweller, Asprey & Garrard, in 2001, which was commissioned to make a distinctive prize designed to stand out from other cricket trophies.

The designers produced a 90cm silver and gold-plated trophy based on a cricket stump as its shank, topped by an orb that represents the cricket world – both geographically and through the inclusion of the emblems of all 10 ICC Members that have played Test cricket.

The stump and the orb combine to portray the mace, regarded as a symbol of authority and prestige. This is regarded as an appropriate combination given the rich history of Test cricket and its image as the most traditional and purest form of the game.

The mace sits on a wooden base with a silver-plated plaque in front with room for engravings of the sides to hold it.

The mace was valued at stg£30,000 in 2001 and automatically passes from one team to another as results confirm a change of leadership in the MRF Tyres ICC Test Team Rankings table.