58 men’s and women’s matches to be played at eight venues from 8 March to 3 April; Mumbai and New Delhi to stage semi-finals while Kolkata to stage finals

The International Cricket Council (ICC) on Friday announced the groups and schedule of the ICC World Twenty20 India 2016, which will be staged across eight venues in India from 8 March to 3 April.

A total of 58 tournament matches, including 35 men’s matches and 23 women’s matches, will be played in the 27-day tournament in Bengaluru, Chennai, Dharamsala, Kolkata, Mohali, Mumbai, Nagpur and New Delhi. New Delhi and Mumbai will host the semi-finals on 30 and 31 March, respectively, while Eden Gardens in Kolkata will be the venue of the 3 April finals. The women’s semi-finals and final will be followed by the men’s knock-out matches. There is a reserve day for the finals.

There have been five different winners of the men’s event while the England women’s team won the inaugural tournament at home in 2009 before Australia won three straight titles in the West Indies, Sri Lanka and Bangladesh in 2010, 2012 and 2014, respectively.

According to the men’s event format, eight sides in two groups of four, will feature in the first round matches with the group winners joining eight sides in the Super 10 stage (two groups of five teams). The top two sides from both the Super 10 Groups will then qualify for the semi-finals. In the women’s event, the 10 sides will be divided into two groups and the top two sides from each group will progress to the semi-finals.

The first round matches in the men’s event will take place in Dharamsala and Nagpur from 8-13 March and will feature Bangladesh, Netherlands, Ireland, debutant Oman (all in Group A), Zimbabwe, Scotland, Hong Kong and Afghanistan (all in Group B). In a double-header on the opening day on 8 March, Zimbabwe will face Hong Kong in the afternoon match, to be followed by the evening match between Scotland and Afghanistan. Both the matches will be played in Nagpur.

The group winners will join Australia, England, New Zealand, Pakistan, South Africa, Sri Lanka, West Indies and host India in the Super 10 stage, which will be played alongside the women’s event from 15-28 March.

Host India, which won the inaugural tournament in South Africa in 2007, is in Super 10 Group 2 along with 2009 winner Pakistan, Australia, New Zealand and the Group A winner. India will launch its campaign in Nagpur against New Zealand on 15 March, while it will go head to head with Pakistan in Dharamsala on 19 March. Its other matches will be against the Group A winner in Bengaluru on 23 March and Australia in Mohali on 27 March.

2009 champion Pakistan will take on the Group A winner in Kolkata on 16 March, before locking horns with traditional rival India in Dharamsala on 19 March. Its remaining two matches will be in Mohali against New Zealand and Australia on 22 and 25 March, respectively.

After taking on England in its tournament opener, the West Indies will square off against Sri Lanka (20 March in Bengaluru), South Africa (25 March in Nagpur) and the Group B winner (27 March in Nagpur). 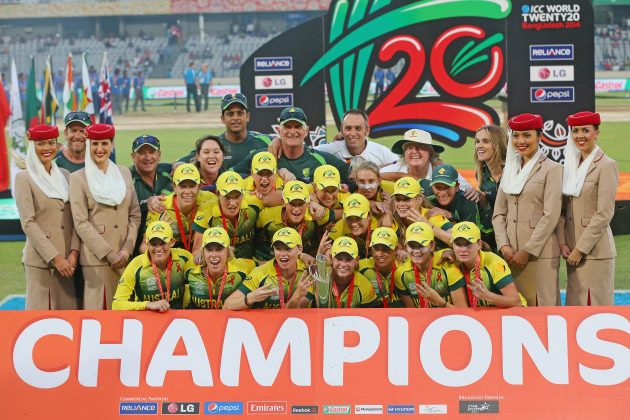 ICC Chairman Mr Shashank Manohar, who attended the launch ceremony in Mumbai, said: “India is a country where cricket is a religion and not many places can match the passion for the game like India. I am fully confident that the Board of Control for Cricket in India will deliver an outstanding world cricket event, just like the ICC Cricket World Cups in 1987, 1996 and 2011.

“The ICC and BCCI are fully committed and will work together to make this a memorable event. I invite fans from across the world to witness fast-paced cricketing action on the field and enjoy the hospitality and culture of India, off it.”

ICC Chief Executive David Richardson said: “The ICC World Twenty20 is an event which puts the world’s best cricketers in the shortest format of the game against each other in a nation versus nation contest.

“The Twenty20 format provides the perfect vehicle by which the ICC can further globalise the game, providing international exposure and opportunity to our top Associate and Affiliate members. The ICC World Twenty20 event structure is designed to provide highly competitive matches throughout, with eight evenly-matched sides fighting it out in the first round and the best two then getting in the mix with the top eight ranked teams in the Super 10 stage where the intensity and competition will be of the very highest level.”

BCCI Secretary Mr Anurag Thakur said: “We, as hosts, are fully prepared to organise one of the most entertaining spectacles in world cricket. We draw experience from hosting three ICC Cricket World Cups and are ready to make the ICC World Twenty20 India 2016 one of the most memorable events.

“Our preparations are in full swing, and BCCI and ICC is working together to make it a lifetime experience for the players and the fans. India is a vibrant country – young, full of colour, energy and exuberance - and is very much like the concept of Twenty20 cricket itself. We would encourage everyone involved with the game to experience the best of India.”

The ICC World Twenty20 trophy was also present at the ceremony before it leaves Mumbai for Scotland on Sunday, 13 December, as part of the Nissan Trophy Tour. The trophy will return to New Delhi on 1 February after visiting 11 countries.

First round (group winners to progress to second round)

*Warm-up schedule to be confirmed in due course